I’ve unfollowed you because you’re full of sh*t!

Home BusinessI’ve unfollowed you because you’re full of sh*t!

I’ve unfollowed you because you’re full of sh*t!

Since becoming a business and mindset coach, I have followed and watched many other coaches, bloggers and networkers across social media.

It’s great because it means my news feeds are filled with positivity, I get to connect and collaborate with great people and learn from other fab coaches.

I have had to to unfollow quite a few major names, because sadly, like every profession, there are a few that just don’t sit well with me.

Now I want to put it out there that I am a HUGE supporter of my peers, but I also HATE bullsh*t and my friends…I’m seeing a lot of bullsh*t.

Let me just put out there that MOST successful people had a period of lack of success, had some time when they had to work for it, had failure and often we just miss that bit.

I’m totally alright with the fake it, till you make it ethos, IF and this is a big IF, it is mixed with truth and vulnerability. Honestly, I am far more interested in people with flaws and vulnerabilities, than blind perfection.

I cannot bare hearing media trained footballers speaking after a game “Well we did our best and well today the game just wasn’t ours…” YAWN! WATCH WAYNE ROONEY HERE boring the world with his media trained post match interview

Tell me something real! WATCH THIS interview with Kevin Keegan, old Newcastle United Manager for something real. Yes he’s angry, yes it’s hilarious, but it’s honest! He wanted to beat them!

I see the same thing online, ‘gurus’ and their followers telling me the same stuff, even copy and pasting it. Seriously though!?

I’m seeing stuff that just doesn’t sit well with my gut and it’s that I trust.

So I unfollowed the ones that made my head spin and I have decided that this year, I shall switch off the noise, otherwise I think we can get caught up in other peoples styles, vibes and not walk our own path.

I want to ask you something too:

I want to really get to know you this year, because this year you are going to create the life you love, IF you’re willing to give a dam good go!

I also have an audio for you on exactly that: https://soundcloud.com/iamhollymatthews/boss-your-life

Lets be true to ourselves and remind ourselves daily that social media is only a fraction of peoples real lives and we are doing just great!
To work with me 1:1 [email protected]

To join my email list (where I often send FREEBIES), look to your right and pop in your email. 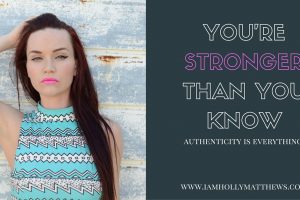 The Power of standing still

Do you ever feel like you are standing still and[...]

Create a Life You Love