I wasn’t sure whether to write this, because of the constant conversations it could create, but it’s such a huge part of my world right now, its hard not to..

We sat in the waiting room laughing and joking, taking the piss out of each other and generally being tw*ts. It’s how we always are, a pair of similar souls, that found each other and connected instantly.

Leaving the oncologists room left us in a more sober mood.

They don’t really have the answer.

They are clutching at straws.

We sat in the car, both kind of silent, shocked, worried, unsure what the hell to say.

A car beeped at us, because the car park was so full and she assumed we were leaving. I jumped out to tell her we were staying and she got annoyed at me.

We got back in the car and and I asked how he was. Stupid question really and we both knew it.

We didn’t really have to say a lot, we both knew the severity of what we had just been told.

I met Ross about 8 years ago and we fell in love immediately. If someone had told me before Ross you could connect like that with someone I would have cringed, but we did.

We have barely spent any time apart and we truly love each other. We have, thankfully built lives for ourselves that mean we can potter around together every day and we never get bored of each other and even if we did, we would just say ‘yeah, you’re boring me now, I’m off upstairs!’

We are a very straight talking couple.

The fact we had children together has been the icing on the cake.

2.5 years ago we were told Ross had grade 4 brain cancer and EVERYTHING changed. After diagnosis Ross had:

He was given a survival chance of 50/50 for five years.

Since his chemo stopped we have lived a fairly normal life. Some adjustments have been made and Ross has been left with the odd seizure (which is far more scary for me, than Ross), but overall he’s amazing.

Nothing had changed in that respect, he still seems the same, but a month ago we were told the cancer was growing again.

When Ross was first diagnosed they ticked the box that said treatment was aiming to ‘cure’, not the ‘prolong life’ box, it was reassuring, felt like we had a chance of getting rid of this fully.

We are now in the prolong box.

Ross has been given the option of another surgery, which he has opted to take (he was asked to consider this for a week, to really decide)

Our reality is now this:

-Ross is going to have surgery
-He is going to have radio therapy again
-We have no idea how long he has, but we know the doctors cannot stop this growing indefinitely.
-They will never give us a time (and nor should they) but we are realistic about what we are being told.
-Our daughters are now older and we will need to help them to understand what is about to happen, this adds to the pressure.

We have had to have conversations over the last few weeks that I never in my wildest dreams imagined I’d be having at 31.
How he would die?
What we do in the eventuality of something going wrong in this extremely risky second surgery? Ross asked me where I want to live, going forward.

Where I wanted to live?

When he said that I couldn’t choke back the tears anymore. I don’t want to be I, I want to be us.

“It’s OK to cry Hol.” Ross said as we sat in the car (still annoying those waiting for a space)

Sadness comes in waves and I’m sure right now we are in a level of denial, which is good and we are by no means lacking in hope and strength.

We find humour in these tricky times, I think you have to and some of our conversations would sound in terrible taste to anyone else, but how do you get through it otherwise?

Neither Ross nor I feel sorry for ourselves. Ross is the bravest man I know, he has made it so easy on everyone around him, he is a hero. I don’t say that lightly, I’m not that corny, but he inspires me.

We know that we have so much more than most people ever have. We didn’t ask for this, but it’s no one’s fault, it’s just a thing that has happened.

A properly shit thing, but part of living, no one is immune.

People ask me how I cope and wonder about my optimism and positivity in life. Perhaps some of you think it’s fake? The truth is, I don’t know how to be any different. I want to be happy and I won’t let anything dictate to me whether I can be.

All any of us have is RIGHT NOW.

Right now Ross is a healthy looking man, he feels no pain and other than a few seizury moments (which we have been dealing with for a while) it’s the same as before.

Until that changes, regardless of diagnosis, it’s business as usual.

We have an amazing bunch of family friends all ready and waiting in the wings and we are so, so lucky to have you all.

I wasn’t sure I would write this, but if anyone is going through something similar, I want you to know you will be OK. Whatever happens.

Live in the moment, focus your mind, like a dam athlete and don’t let anything but positivity and healing enter your head. Don’t waste the time on sadness, when the person you love is still with you.

Im’a need you all in the coming months, so thanks for kicking around with me and I promise to be authentic and true to what is happening.

*PS, this post was posted on Facebook and staggeringly has been viewed by over 80,000 people and shared hundreds of times! So many amazing messages from people all over the world. Thank you for your INCREDIBLE, incredible support. 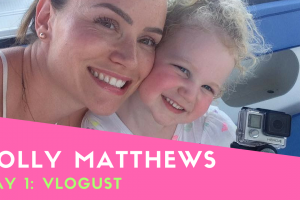 I only just found out what Vlogust is and for[...] 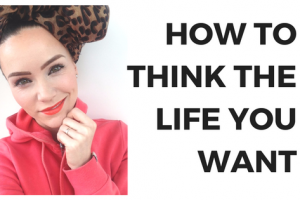 How To Think The Life You Want…

Lets talk about your dream life… Do you really believe[...]